With the continued drop in the state passivity rate, today Governor Cuomo announced that beginning March 15 marriage receptions can return under new parameters. The newly planned restrictions are as follows: 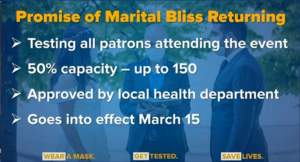 In addition to these restrictions, the State is in development of an app that will be used for proof of testing and to accompany this initiative. The Governor also indicated that the State is developing guidance for other general events where tests would be administered followed by the monitoring with the regulation of the event falling to the local health department

Governor Cuomo also announced today the return of indoor dining in New York City this coming Valentine’s Day, February 14th. Indoor dining will still be limited to 25% of capacity for eateries in New York City as they would return to using the previous guidance that was published in executive order 202.61.

Mayor de Blasio last night delivered his final 2021 State of the City video to lay out his vision for the future of NYC.  The video is 28 minutes long.

When questioned today about the recent report from New York State Attorney General Tish James that pointed to, among other things, a larger number of nursing home residents died from COVID-19 than Department of Health’s data reflected. The DOH Commissioner Dr. Zucker stressed the Department followed CDC guidance and were transparent while also acknowledging that there would be additional hospital deaths.

The statewide positivity rate yesterday was 4.65% with 8,357 hospitalizations, a decrease of 163 people over the previous day. There were 150 COVID-19 deaths in New York State yesterday.