Today, Governor Andrew Cuomo presented his fiscal year 2022 Executive Budget proposal, one that is heavily reliant on additional federal aid coming through. The proposal is outlined in the Executive Budge Briefing Book, and we expect budget language to be published at some point this evening.

The Governor’s proposal is wrapped around two potential paths forward for the State, both of which are tied to the federal government and the level of state and local aid provided to New York from a future federal aid package. 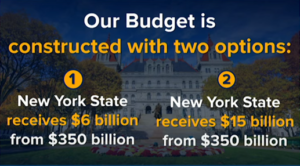 Option one would provide only $6 billion from the federal government, forcing the State to borrow, raise revenue and cut expenses.

Option two would provide the full $15 billion that the State has requested. This would allow the State to advance a number of new proposals, including a public/private infrastructure plan worth $306 billion; enact a $1.3 billion rent relief program; institute a $15 cap on broadband for low-income families, and; create a Pandemic Recovery and Restoration Program to support small businesses, restaurants, and the arts.

The Governors full executive budget press release outlining the 2022 Executive Budget proposal is below. As of 6PM, no budget bills have been formally introduced. We expect the bills to be introduced this evening and we will be reaching out to client’s individually as we comb through the hundreds of pages of budget bills.

The Governor announced today that the State’s health care distribution sites have administered 79% of first doses received from the federal government, and 77% of first and second doses. The State has also launched a new COVID-19 Vaccine Tracker Dashboard. This dashboard will provide an update on vaccine distribution including the number of doses received by the state, a breakdown of first or second doses, and the number of persons inoculated with the first and second doses in each region. This data will be updated daily.

The statewide positivity rate yesterday was 7.06% with 9,236 hospitalizations, an increase of 368 people over the previous day. There were 167 COVID-19 deaths in New York State yesterday.